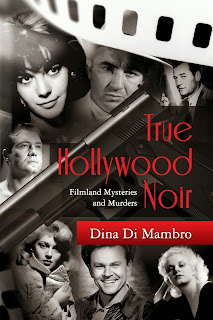 Filmland has captivated millions for years.  For most of us, it's the same thing as a little girl having princess dreams.  We see glamour and beauty and a wish for our lives to be so bold.  Logically, we all know it has a seedy side, but we choose to see the wonder and magic.  It gives us power to get through our own lives.

In this book, Di Mambro explores the darker side of Filmland.  We see beloved characters and get a glimpse into their lives and backgrounds as well as their final downfall.  Most of these are unsolved, but each story is presented in such a way that we find a masterful whodunit.  We, as readers, get to figure out what we actually think happened in each case.

For me, the fun part of this book was reading about my own personal beloved actors.  I'll admit it, Chris Walken was my favorite 'character' in the book.  He isn't even really a part of any of the mystery, but I sure love reading about him.

Don't read this just for a treasure hunt to find your own favorites though.  Even people I'd never heard of had fascinating mystery stories attached to them.  Sometimes murder, or attempted murder, but there are some great scandals going on as well.  Everything Di Mambro has posted in this book is backed up and not mere theory.

For me, personally, I was disappointed that Micky Cohen took up a quarter of the book.  I really felt like he could have been condensed a tiny bit more and someone else added in.  Another option would have been to do a separate book on him.  I felt like Di Mambro was much more interested in his story than the others and the others were added as filler so that it was large enough to publish as a full book.  Don't get me wrong, the other stories are well-developed and entertaining, but I felt like all of her passion was poured into Cohen.

This is a must have for every film buff and true crime reader out there.  Even if you're neither of those things, you're sure to find something in this book that appeals to you, whether it be mobsters or romance.
Posted by Literary Litter at 8:58 AM