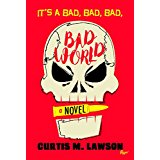 When the Vatican's top assassin, a Rhodesian merc, a pair of serial killer lovers, a dirty cop, and a professional sadist compete in a mad race for a pair of priceless magical artifacts, betrayal, theft, and murder are just the opening moves in a game of death.

Oh my goodness!  I had so much fun with this book!  It's kind of like Rat Race but with the dregs of society!

I loved the characters and the world building!  It's ugly and crass and horrible!  These are some mean, nasty, vicious people and the world they live in is the same.  You'll find no saints here and you'll be hard pressed to find what can pass as good values.  Each person has their own code of rules, which they try to live by.  You'll find a lot of 'Well sure I kick camels, but I don't hit them!  That's just wrong!'  I use that as a loose example.  Each one sees what they're doing to be perfectly acceptable while at the same time, not being able to comprehend the wretched sin of the others.

This is an extremely graphic and upsetting book.  If you get a little queasy, you may not want to attempt this one just yet.  Otherwise, you'll find a well-crafted story with fascinating characters.  You'll be left wondering who's going to be standing at the end.  Pick your favorite and cheer them on!

I'm glad to hear that there's a second book coming out.  I'm particularly interested in the character of Philip Carver.  Watch for him when you read the book!

I don't normally say a lot about illustrations, but I had to stop reading long enough to look through the book to find who was responsible for them in this case.  At the beginning of chapter nine, Broken Finger Blues, there's a picture that just really caught my eye.  I've gone back to look at it several times.  I'm not sure what I find so captivating about it, but it really hits me.
Posted by Literary Litter at 10:55 AM