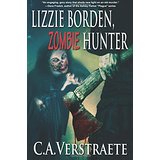 One hot August morning in 1892, Lizzie Borden picked up an axe and murdered her father and stepmother.  Newspapers claim she did it for the oldest of reasons:  family conflicts, jealousy and greed.  But what if her parents were already dead?  What if Lizzie slaughtered them because they'd become zombies?

Thrust into a horrific world where the walking dead are part of a shocking conspiracy to infect not only Fall River, Massachusetts, but also the world beyond, Lizzie battles to protect her sister, Emma, and her hometown from nightmarish ghouls and the evil forces controlling them.

This book was not what I was expecting!

If you've read Abraham Lincoln, Vampire Hunter or Anna Karenina and the Robots or any of those wonderful books, then you have an idea of what you're in for here.  It's a classic tale, or history, that has been retold to include the monstrous.  I've loved every book that I've read in this genre, and this book falls into that category perfectly.

The unexpected part for me is that we start off with the killing of Lizzie's parents.  I was expecting that to be the crux of the story, but it isn't.  It's the opener!  Most of the story is actually about the mystery of where the zombies have come from and how her parents became afflicted.  Secondary to that is the unfolding of Lizzie and her sister's lives as they attempt to get past their parents' deaths.

Where this book differs from others in this genre, that I've read anyway, is that there are historical facts pulled in.  Verstraete adds in news clippings and first account witnesses as well as pieces from the actual trial of Lizzie Borden.  I actually learned a few things from this book!  It also lends an extra facet of realism to the story.

I do wish that I could have gotten to know Lizzie better as a character.  You get to see plenty of her thoughts and emotions, as well as her motivations.  I just felt like she was a bland person, though.  I couldn't see myself having tea with her because I didn't know enough to strike up a conversation with her.  I wanted to really bond with her and start a He-Woman Zombie Haters Club or something.
Posted by Literary Litter at 8:50 AM